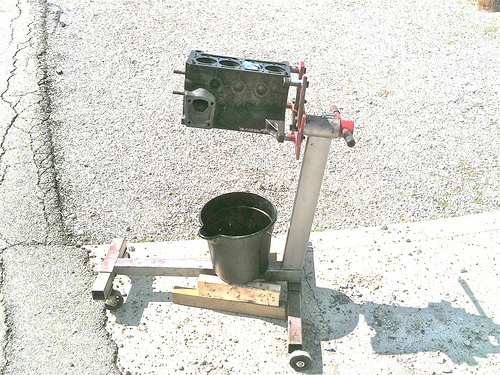 Finally! The stuck #3 piston is free! My son, Kai,  and I went to the shop today with that one, single goal in mind. We had let the Kroil sit for a solid week and a half an it did look like the level went down some but it was slight, less than 1/16″. I had read in more than one place that the key to getting the piston free was going to be heat. I had tried a heat gun but it just didn’t get the block hot enough. There were also a couple of places on the internet that had suggested setting the block on fire. This seemed like a drastic measure but after actually setting the block on fire, the process wasn’t to bad. I had also talked to a couple of old-timer farmers (they are easy to find here in Indiana) who said this method is what they would use in springtime to tractor engines with stuck pistons when the ATF and kerosene mixture would not break the engine free.

The block already had the Kroil sitting in it but it was full, about 1 – 1.25″. I used a blue paper shop towel that you can get anywhere and soaked up as much as the towel would hold. This was the towel I was going to set fire to so I set it aside and flipped the engine to drain out the rest of the penetrating oil.

I had made a wooden marshmallow that fit into the cylinder to use as a hammering surface but I broke it last  week when I was trying the heat gun. So I split a 18″ piece of 2×4 so it would fit into the cylinder. I also brought a hand sledge instead if a regular framing hammer. Kai gathered up some used, oily rags and put them in the bottom of a bucket to catch the piston so it wouldn’t hit the concrete. Then we wheeled the engine stand outside, our wooden pieces, the sledge and the bucket into the warm spring day.

Before I set the block on fire I took a towel with a little bit of the Kroil out into the street to see just how flammable it was. I don’t know if this is the best way to test this but it worked for me. I didn’t flash like gasoline. It was a lot like lighting a tiki-torch. So, I stuffed the soaked shop towel down into thee stuck cylinder and put the match to it. Here is a little video to show the burn:

It was not too bad. I let it burn like that until I could start to feel the heat on the outside of the block where there was solid material from the #3 to the outside. It took about 20 minutes. The cylinders have water jackets around them and so those areas did not get warm to the touch. As the block heated up I would periodically pull the still flaming shop towel out with a pair of long needle nosed pliers and put it on the limestone rocks. I would them put the 2×4 into the cylinder and give it a smack. At first the piston wasn’t moving at all but eventually it did give. It would move a little in one direction then I would put the flaming towel back into the cylinder for another 5 minutes. This went on for about 40 minutes or so until it finally kept moving all of the way out of the cylinder. The walls were rough but didn’t seemed to be horribly scored so maybe it will be a simple honing. I will have to get some information on the size of the cylinders, pistons and rings. I know that the cylinders are 65mm stock and 1mm = .04″ so maybe boring to 66mm will be fine with a different set of rings.

Finally! Now I can get busy with making it ready for rebuild. The block needs decked and the cylinders at best need honed and at worst bored and perhaps sleeved and everything needs cleaned and painted.